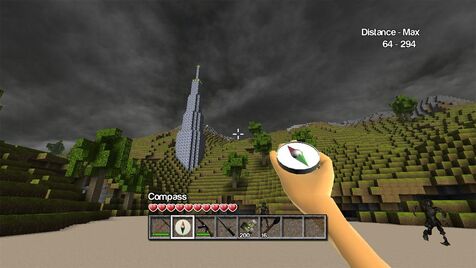 There are eight Biomes (excluding Lantern Land) in CastleMiner Z that may help or hinder your survival.

As you travel farther from spawn, you descend in elevation. This is how the biomes in CastleMiner Z change, the distance increases depth and variety.

The forest is where you first start out near the spawn tower. It's an assortment of small caves along with a few hills and some flat land. The dangers here are the relentless undead or falling down into a cave, so it's best to build a house underground before preceding towards the next Biome (this is a good strategy in Endurance Mode). The Fire Dragon will spawn in this biome so upgrade your weapons before you see it flying, as it's found anywhere in the 0-100 distance. The Forest and Elevated Forest are the only sources of trees. Once depleted, the player (and most often his/her squad) must travel far beyond Hell on Earth to find another Forest biome just to gather more trees (certain monsters can drop crafted wood, however, the actual logs are non-renewable). While wood can be used for resource creation, you're better off finding coal to use instead since wood is used for crafting a lot of other things.

The Elevated Forest is like the forest, but with oddly shaped caverns and floating islands scattered out in the sky. You can find the Forest Dragon in this biome. Players must take extreme caution when traveling by the Elevated Forest because there's not only a chance to get caught off guard by the undead but falling down 30 meters from the air on any of the islands can seriously injure or kill you or your squad. Also, beware that many hostile mobs will spawn in the dark areas below the islands, which are at many times pitch-black.

It's a good place to set up bridges or small houses around the biome, though the Dragons will attack you hereafter day 3, or around 785-800m. You can find this biome at around 200m. The fact that there is no water in Castleminer Z (ice and snow but still no real water) suggests that the Elevated Forest possibly used to be an island biome, and the forest under the floating islands grew after the water subsided. This is especially plausible (yet still a theory) as there is usually a drop from the forest biome into a miniature desert, suggesting the drop used to be the beachhead.

Note: It is recommended to gather as many resources as you can at this point (Aside from wood), mobs will spawn frequently on the surface, so stay and travel underground at all times. It should also be mentioned that the more you travel, the rarer ores can be found much easier, and as well as Hell getting closer.

The desert has little or no useful resources except for rock and sand. It's also very dangerous to get caught in the open (although some players may consider it as an advantage as it offers clear lines of sight), so players should build below the surface in order to survive this harsh wasteland. There are some hills (also known as dunes) in the Desert but they provide very little cover from the Sand Dragons that spawn here.

However, under the desert players can find many deep chasms which have huge amounts of rare material such as gold, diamond and Bloodstone. This is also the only place where sand zombies will spawn. Alien Crash Sites are much more conspicuous and more likely to be spotted in this biome, as the surface is often very flat and dull.

The mountain biome is quite hard to navigate through because of the deadly falls, and because zombies can drop down on you from above, taking you by surprise. You can find tons of coal, copper ore, and iron ore.  If you dig down in the caves, you can find gold ore as well. as most of the surface is covered by rock.

The arctic region consists of snow, ice, and rock on the surface. It may be considered more difficult than the desert biome because of the ability of Ice Dragons to spawn and because of the ditches that are dotted around the biome, as there is no telling how deep those ditches are. You will find lots of frozen lakes on your journey.

Shortly after leaving the mountains and entering the Tundra, there is a short wall of snow that can be seen as the Tundra used to be the last biome.

This biome is a rock surface with visible ores scattered everywhere, above and under the ground. These include coal, copper, iron, gold, and diamond. This biome is referred to as "Miner's Paradise" or "Heaven on Earth" and sometimes "Ore Land", as there are gold and diamond everywhere. The bad thing about this biome is that zombies spawn at all time there, and most caves have an opening on the surface that zombies can get through. Setting the world to No Enemies (on Survival) will help you if you plan to only go mining.

This biome is the biome that you find immediately before you get to hell. The surface and hell continually get closer together the further you get from the start which is why rarer ores are found closer and closer to the surface as you go along. This biome is so close to hell that there is no grass, only rock, and ore. This region is also very helpful as it has a very shallow drop into hell from here so you will take little to no fall damage.

This biome is populated with skeletons and lots of zombies, so it is best to proceed once you have higher level weapons. A very large amount of rare ores can easily be found here. Also, because of the depth of this biome, the sun will not shine in the skybox but you will still receive some of its light. In older versions of the game, this biome didn't exist, instead, there was a straight drop from the Tundra to hell that could instantly kill you if you fell down.

To get to Hell (also known as the Underworld), you either need to dig 40 blocks deep or walk to 3400+ distance. (Note: When you are digging to hell, make sure you know what you're doing or you may fall to your death when you break through the ceiling) This is the most difficult biome and attempting to challenge it is only recommended with at least diamond+ weapons and a large supply of ammo.

This is the only biome Undead dragons spawn at and Bloodstone is found. All surfaces here are made of Bloodstone, so it is the most readily available source of it. Also, the enemies here are harder to kill than on the surface, so bring upgraded weaponry if you expect to survive. One may also hear what sounds like faint screams/breathing when it is quiet. All Undead & Demons spawn here. Beyond Hell, you can find Oreland again where the world regenerates. Then you go through the Arctic Region and eventually find the forest again after traversing the desert. This repeats until around 20,000, where a huge wall of bedrock with lanterns on top is generated (Lantern Land), and more glitches may occur.

From the spawn tower, the further in the distance you go, the closer hell gets to its ceiling, until at around 3400+ distance when the surface completely disappears and gives way to hell. After that, there is a large hell biome for several thousand more meters, until the surface starts again.

Orelands are found at both the ending and the starting of the hell biome. It is possible (yet still difficult) to make a small fort in the underworld beneath the starting biome and continue onward (whereas it is easier to survive in the open Hell since by the time you get there you would most likely already have adequate weapons). Such forts are usually small and cramped often more, akin to a bunker.

You can create stairs on the spawn tower to safely (and very quickly) travel to the bottom and build an adequate fortress. This is the fastest way of getting Diamond, Gold and Bloodstone equipment in Endurance Mode.

Note: You can survive traveling in hell with practice and skill. It's easiest to do this with an axe (Iron or better) since it conserves ammo and kills zombies quite well, though since the skeletons in hell take much longer to kill it is best to outrun them as they cannot catch you and you can stun them. In the darkness of Hell, you must listen for zombies and quickly take them out, keep moving to keep from being overrun.

If you even attempt to "rush" you should already have someone with a Bloodstone pick, then search for an Alien Crash Site to build bridges on the underside of the meteor above the zombies reach, then a pit to collect Bloodstone for those who cannot harvest the Space Rock\Goo. Laser Swords and guns are easy to make now but as ammo is a priority you must get Diamonds. Have one person run around collecting things while the rest cover that one person. But be careful not to destroy the bridges and ladders so your rusher can get back up. Share supplies and you can easily make the run to the Undead Dragon.

The Alien Crash Site Biome is not found at any specific distance (although they usually start spawning around distance 300); rather, it is found sporadically and randomly within other biomes.  It is a large crater, in the center of which is a meteor made of space rock and, less prevalently, space goo.

Aliens are the only naturally spawning mob here, and will defend the meteor should you approach it. Finding this biome is essential to creating laser weaponry. In the Hell Biome at around 3600m, a version of this biome suspended high in the air can be found. This second variant of the biome is very often referred to as the mothership. They can vary in size, but one of the largest motherships ever recorded was over 300 blocks long. They usually become larger with distance.

There is usually a massive crevice underneath Alien Crash Sites (some of which must be dug into and aren't always exposed to the surface) which contains various ores and extra caves, sometimes even with an extra entrance to the underground Hell Biome.

Community content is available under CC-BY-SA unless otherwise noted.